The Fair Housing Act (FHA), also known as the Civil Rights Act of 1968, was established in order to protect people who are renting or buying, applying to get a mortgage, or applying for housing assistance from discrimination. 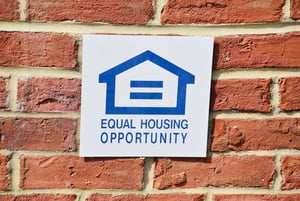 Per HUD guidelines, residential properties that are for rent or sale must have the equal housing opportunity logo or a statement that alerts people that the property is available to anyone and everyone that is interested in purchasing or renting.

What type of housing is covered by the Act?

Nearly all housing is cover by the FHA.  In some circumstances, owner occupied houses with a maximum of four units may be exempt.  Housing that is rented or sold without an agent or broker, or is operated by a private “members only” club may also be exempt.

What is considered illegal discrimination in house sales and rentals?

Below are only a few actions that are not allowed based upon race, color, national origin, sex, familial status and disability:

Under the FHA, it is also illegal to discriminate in mortgage lending.  The following are examples of actions that are illegal to take based upon race, color, national origin, religion, sex, familial status and disability:

When the FHA was signed into law, discrimination was running rampant.  The housing market was no exception.  There were attempts of complete segregation in neighborhoods and flat-out refusals to rent or sell to people that were more than qualified, but denied due to race, religion, etc.  Since the Act was put into law, discrimination in housing has certainly decreased, however according to the National Fair Housing Alliance (NFHA), still today, there are thousands of discrimination complaints filed each year, and more than half of those are based upon disabilities.

Anyone who thinks they are or have been discriminated against when applying for funding or trying to buyer or rent a house or apartment should speak to a lawyer or file a complaint with HUD (HUD.gov) or with the NFHA.